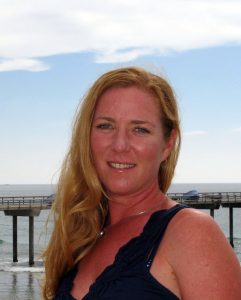 Jen is a coral reef ecologist with primary expertise in benthic communities (marine plants, corals and other invertebrates). Her primary interests are in determining how various physical and biological processes affect the structure and function of marine communities. Jen has been interested in determining how human impacts affect or alter marine communities. Currently Jen and her students are working on understanding how local stressors such as pollution, overfishing or the introduction of invasive species affect coral reefs. Jen’s lab is also working to determine how global stressors associated with climate change such as warming or ocean acidification will alter reef species. Much of the research in the Smith lab is focused on marine conservation and restoration of degraded habitats and often involves multidisciplinary activities. Jen and her students are actively working to develop effective management strategies for coral reef communities around the world.
Dr. Jennifer Smith Curriculum vitae 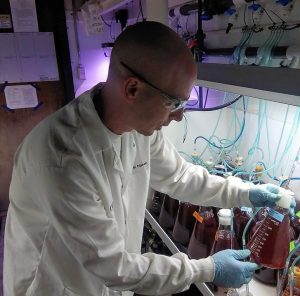 Gal has studied various aspects of aquatic photosynthesis since 2007, including phytoplankton and their interrelation with different light climates (MSc., Bar-Ilan University), corals and their photosymbionts, and microalgae performance in aquaculture systems (PhD., University of Haifa). Gal also believes that environmental education is key to building a better world, and put that into practice as the scientific director of the Ecological Greenhouse (Ein Shemer, Israel) where he mentored young students in environmental responsibility and scientific thinking. His interests in sustainability, algae cultivation, and environmental awareness all align in his current postdoctoral research which aims to optimize and industrialize the cultivation of seaweed that may help reducing methane emissions produced by the cattle industry. Gal moved to San Diego in June 2019. He is married to Tamar and father to three amazing kids. He enjoys biking, hiking, spending time with his family, and learning to surf. 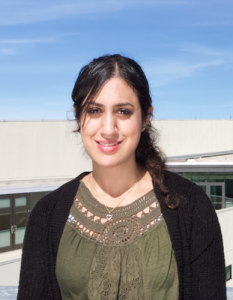 Adi graduated from UCSD in June 2014 with a BS in Environmental Systems and a minor in Spanish Literature. She previously volunteered for the Smith Lab and now, as a PhD candidate, she is interested in how coral reefs are responding to global climate change. She is using a time series of permanent photoquadrats taken by Dr. Jennifer Smith over a 12-year period on Palmyra Atoll, in the remote Central Pacific, to measure bleaching, recovery, growth, and mortality in common coral taxa over time. Additionally, she is using these images to look at the abundance of algae and other benthic organisms in the context of heat stress. Adi is passionate about using art to communicate science, and she makes digital illustrations of marine life in her spare time. She also enjoys taking care of all of the lab “pets.”

Check out her blog! adlysia.wordpress.com 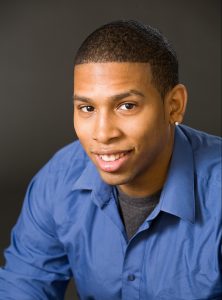 Daniel Conley is a PhD candidate studying coral behavior and photo-physiology in the Smith Lab. Prior to starting his PhD, Daniel received a BA in Japanese language and Literature and a BS in Biological Sciences with a minor in Theatre Arts from the University of Pittsburgh. He then went on to receive an MAS in Marine Biodiversity and Conservation and an MS in Marine Biology from Scripps Institution of Oceanography. Daniel primarily focuses on experimental designs which are completed in a laboratory setting. To this end, he has started and is currently maintaining a coral farm to supply his experiments with specimens. Daniel is interested in what makes corals behave the way that they do and how those behaviors influence how we observe them. This is to better inform the field of remote sensing where the goal is to understand what is happening on the surface of the Earth from space using satellites. 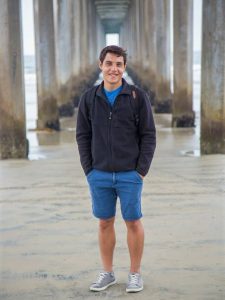 Orion graduated from the University of Maryland in May 2015 with a BS in Ecology and Evolution and a minor in Geographic Information Systems. His interest in conservation drew him to study abroad in Australia at James Cook University, where he got involved with coral research. Since then, Orion’s research interests have focused primarily on the intersection between ecology and marine conservation. He has conducted applied research related to fisheries management and coral reef resilience while at the International Pacific Halibut Commission and the World Wildlife Fund, respectively. More recently, he worked as an Ocean Policy Fellow at the Meridian Institute, a DC based non-profit that works to design collaborative processes to address environmental policy challenges. Now at Scripps, Orion is interested in studying how coral reefs change over time in response to disturbance events. Outside of the lab, Orion enjoys making pottery, going to the beach, and exploring sunny San Diego. 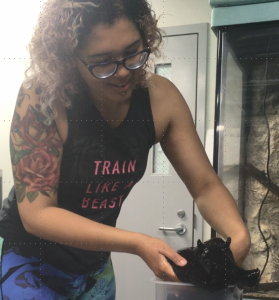 Dani started her academic career at Mt. San Antonio college later transferring and graduating from Cal Poly Pomona with a BS in Biology- zoology option and a minor in French. Prior to graduating, her interest in animal behavior led her to an REU at Rutgers University Marine Field station determining settlement cues for the larval stage of the Atlantic horseshoe crab. She went on to earn a MS degree in Biology at Cal Poly Pomona continuing her undergraduate research in determining the feeding rates of the black sea hare when offered brown macroalgae common in southern California while also completing long term monitoring surveys with the Multi-Agency Rocky Intertidal Network (MARINe). As a PhD student, she is interested in how the native algal assemblage in southern California may be affected by invasive macroalgae with particular interest in preserving native kelp species. To relax, Dani enjoys taking Hip-Hop dance classes, reading, tide pooling, snorkeling and rolling in sand with her dog, Tiramisu. 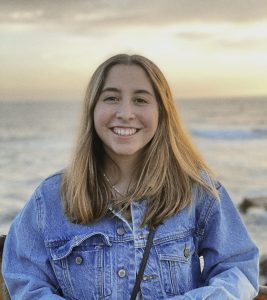 Sarah started in community college and transferred to UCSD where she graduated with a B.S. in Marine Biology and co-led the Scripps Education Association (SEA). Her interest in coral reefs started when she volunteered in the Smith and Sandin labs and explored research as an undergraduate. Now, her project focuses on calcification accretion units (CAUs) to evaluate reef growth, benthic community composition, algal succession, and coral recruitment on Palmyra Atoll, in the remote Central Pacific. She is interested in how coral recruitment changes over time in the context of disturbances such as coral bleaching events. Sarah enjoys playing music, spending time with her cat, snorkeling, and hanging out with family. 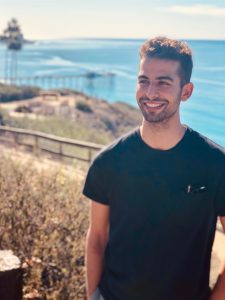 Mohammad’s PhD research explores the impact of climate change on the kelp forest environment across varying spatial scales. The knowledge gained from this examination is crucial when dealing with endangered species, and it is especially relevant to white abalone population restoration, which is the focus of his work at the California Department of Fish and Wildlife and the National Oceanic and Atmospheric Administration. Mohammad earned a Bachelor of Science degree in marine biology at UC San Diego and conducted fisheries research at NOAA before beginning graduate school at Scripps Institution of Oceanography. As a marine ecologist, Mohammad places strong emphasis on field techniques and observation. 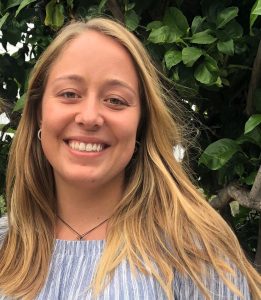 Hannah is a Master’s student in the contiguous B.S./M.S. program at Scripps Institution of Oceanography studying marine biology. Before graduating from UCSD in spring 2019 with a BS in marine biology, Hannah became interested in seaweed aquaculture when she started volunteering in the Smith Lab, working with the cultivation of edible algae. That path brought her to the master’s program where she is currently studying Asparagopsis taxiformis, a unique alga that has the potential to help mitigate methane production in cows. Hannah is currently conducting experiments to determine the optimal conditions in which to grow the seaweed. In her spare time, Hannah can be found surfing the waves at Scripps, backpacking around Southern California, or petting the nearest dog. 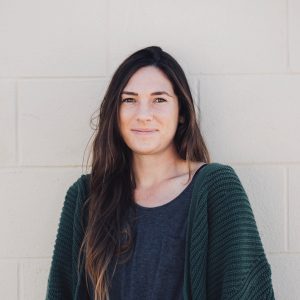 Marie is a Master’s student utilizing large scale photoimaging techniques to study Diadema antillarum density thresholds and their effects on the recovery potential of degraded coral reefs in the Caribbean.  Marie graduated from UCSD in 2016 with a BS in Marine Biology. As an undergrad, she volunteered in the Smith and Sandin labs working with large-scale imaging techniques to quantify benthic composition on coral reefs.  As a volunteer, Marie found a passion for research and science communication. After graduating, she worked for Reef Environmental Education Foundation, as their Invasive Species Program Manager, educating and engaging volunteers in invasive lionfish mitigation efforts.  She now works for San Diego Coastkeeper as their Marine Debris Coordinator, where she strives to connect San Diegans to hands-on environmental stewardship opportunities and marine debris prevention strategies. In her free time, Marie enjoys surfing, painting, and playing with her giant golden retriever, Maverick. 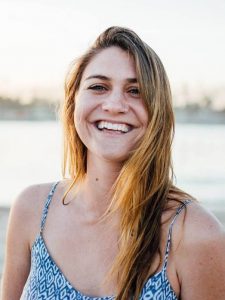 Bella is a Master’s student studying the rocky intertidal ecosystem using large scale digital imaging technology. She graduated from UCSD in 2017 where she was a volunteer in Jennifer Smith’s lab while earning her BS in Marine Biology. In the years since graduating she has focused her career on conservation in the form of outreach and education. She has worked abroad for a marine conservation organization in Madagascar, and locally as an educator for Birch Aquarium. She is interested in studying local ecology in order to support conservation and education efforts. In her free time, Bella loves to surf, watch sunsets, and pet other people’s dogs. 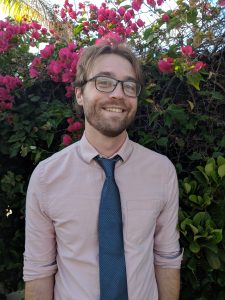 Will is a Master’s student studying the red alga Asparagopsis taxiformis, the role it could play in methane mitigation and its potential for aquaculture. He graduated in 2016 from California State University East Bay with a BS in Ecology and Conservation Biology and Minor in Chemistry. He began as a volunteer in the Smith Lab working on experimental aquaculture, and quickly became fascinated by the myriad possible applications of algae, particularly in regards to tackling climate change. Will is currently studying the relationship between genetics and environment to the quality of algae that can be produced. In his free time he’s in the ocean, reading a book or hiking with friends. 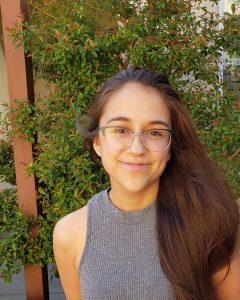 Sabrina is a Master’s student in the BS/MS contiguous program for Marine Biology at Scripps Institution of Oceanography. She graduated from UCSD with a BS in Molecular Biology in Spring 2021. Before graduating, Sabrina volunteered in the Smith Lab where she became interested in coral reef demography and coral species with fission-fusion dynamics. Sabrina is using population genetics along side large-area imaging techniques to track symbiont distribution patterns in the coral species Porites lobata and Porites compressa which can be visually and genetically indistinguishable. Sabrina is interested in mapping the genetic diversity of symbiont communities to aid in conservation and management efforts of coral reefs. In her free time, Sabrina enjoys drawing, dancing, and surfing in beaches across San Diego. 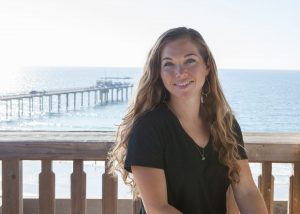 Sam graduated from UCSD in 2012 with a B.S. in Ecology, Behavior, and Evolution and a minor in Studio Art. She completed her M.S. research in the Smith lab in 2015, where she studied the functional roles of herbivorous fishes on coral reefs of Maui. In addition to her current role as the Smith Lab manager, Sam oversees the Scripps Ocean Acidity Real-time (SOAR) Monitoring Program. She also assists with a variety of projects, including the 100 Island Challenge, as a coral reef benthic scientist identifying coral, algae, and other benthic invertebrates. In her spare time Sam enjoys painting, yoga, and competitive sandcastling. 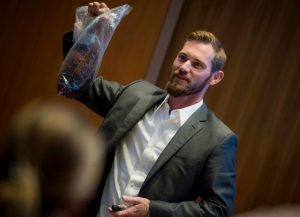 Brant’s primary project interest is sustainably growing food from the ocean and expanding algae aquaculture in the United States. He completed a BS in Environmental Systems in 2008 at UCSD and a MAS in 2018 from SIO. His current science communication projects include the Scripps Coral Garden installed in the center of the Scripps campus which utilizes succulents to evoke a coral reef environment. The project highlights the scientific visualization tools utilized by the 100 Island Challenge and Smith Lab to conduct coral reef ecology studies. Additionally, Brant co-founded and manages the science film series SALTY CINEMA at SIO which connects the public, scientists and storytellers via public film & panel speaking events. Previously, Brant worked in start-ups with roles in business development, marketing, and communications. He returned to work with SIO in the business development office supporting Scripps teams in the Triton Innovation Challenge and is now staff in the Smith lab.