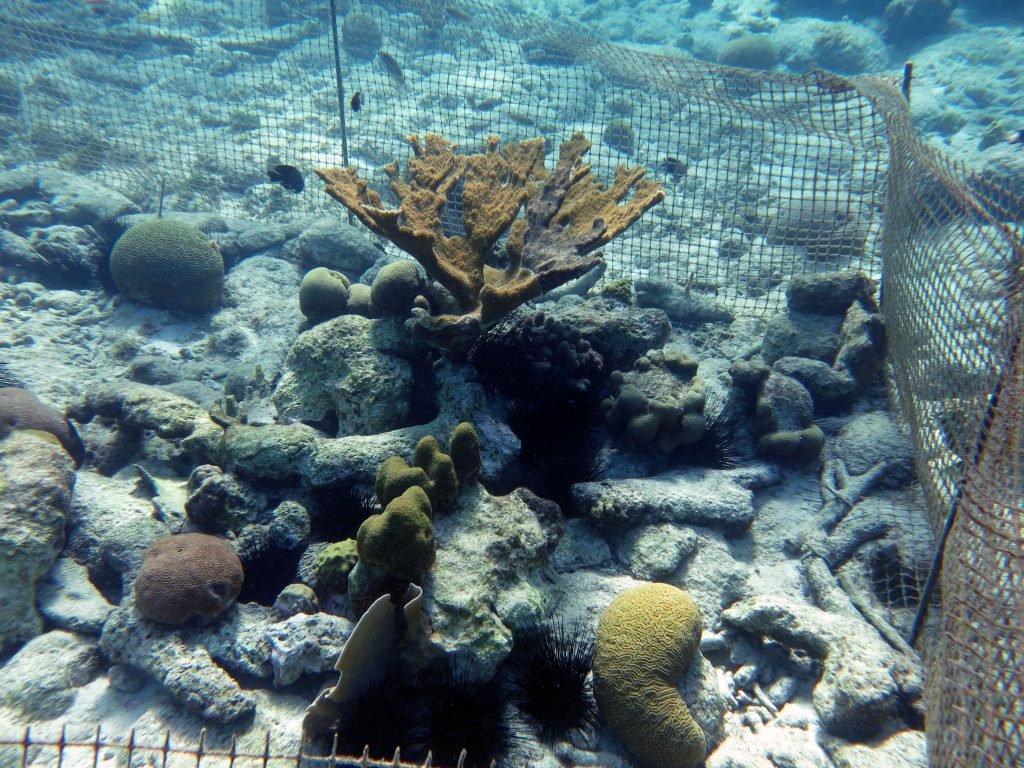 Project Summary: Caribbean coral reefs have suffered widespread declines in overall health and coral cover over the past several decades. These declines are largely attributed to a combination of natural and anthropogenic disturbances acting in synergy. Local human impacts such as overfishing, coastal development and pollution can promote overgrowth of slow-growing corals by faster-growing seaweeds. Further, disease, hurricanes and sea-water induced coral bleaching have all led to direct coral mortality followed by overgrowth of fleshy algae. Once fleshy algae become dominant on the reef benthos, it is unusual to see natural recovery. Recently, efforts to undertake reef restoration have been attempted by scientists but these efforts have had varying levels of success. Here, our team uses a strategic approach to identify the factors needed to successfully reduce seaweed abundance and enhance coral recovery.

Numerous observations from the field indicate that the only places that corals are recovering naturally are in areas where populations of the long-spined sea urchin Diadema antillarum have recovered. This sea urchin is a voracious grazer of seaweeds that aggressively compete with corals, but they suffered a Caribbean-wide disease-induced mortality event in the 1980s. Prior to this die-off, Diadema was believed to function as the primary “lawnmower” of Caribbean reefs, keeping algal abundance low thus promoting coral dominance. Unfortunately, recovery of this species following the die-off has been slow, but recent observations highlight that recovery is now underway in patches. Our team has observed that reef habitats adjacent to Diadema populations appear to be naturally recovering with less macroalgae and abundant coralline algae (an important reef cementer and a facilitator of coral larval settlement) and new coral juveniles. Despite these observations, this idea has never been scientifically tested or investigated. Our team is using a large-scale, controlled, field-based experiment to test if and/or how Diadema density affects the recovery potential of a degraded coral reef.

See 3D videos of our plots: