The Smith lab’s research focuses on understanding the factors (natural, anthropogenic, physical & biological) that influence community structure in benthic marine ecosystems. While we conduct research in a number of different systems, our primary focus is on tropical coral reefs and California’s rocky intertidal and kelp forest systems. 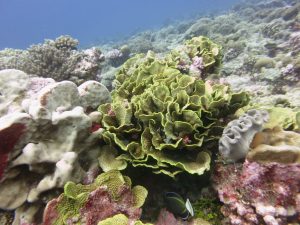 Most of the knowledge that we, as scientists, have gained from coral reefs has come from studies that have been conducted in  the last several decades on reefs that have been highly disturbed (Caribbean, Hawaii, etc). In order to understand what coral reef systems look like and how they function in the absence of human disturbance, the Smith lab and several collaborators have been conducting research in the highly remote Central Pacific. This research has revealed that in the absence of local human disturbance, coral reefs may be resilient to climate-associated impacts. This research is ongoing and involves detailed experiments, observations, taxonomic catalogues and sample collection, and statistical analysis. The results gained from these studies are being used to set targets for the conservation and restoration of degraded reefs elsewhere in the world. Our lab maintains one of the longest coral reef monitoring programs on Palmyra Atoll and just completed 10 years of data collection. 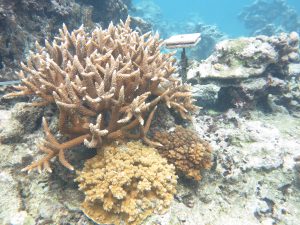 The Smith Lab is using experimental ecology to better understand coral reef restoration strategies. We currently have two active restoration experiments running. The first explores techniques for the removal of invasive species (corallimorph) in conjunction with coral transplantation on Palmyra Atoll. Specifically, this work addresses how spatial arrangement of coral transplants affects their growth and survivorship. This experiment has been running for 4 years. In addition, the Smith Lab is working in the Caribbean to explore how enhancing the abundance of the long-spined sea urchin, Diadema antillarum, might influence the recovery of degraded reefs. Here, Jen and her lab, in collaboration with CARMABI and SDSU, are in the process of conducting a sea urchin enclosure experiment. The team hopes to identify the density of Diadema that is needed to reduce algal abundance and thus facilitate coral recovery. 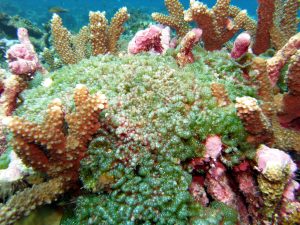 Competition for space on coral reefs can be fierce where benthic organisms are often in direct contact with one another. Throughout the stages of reef degradation, it has been suggested that algae are able to overgrow reef-building corals, but there has been little evidence to suggest how this occurs. Jen has been collaborating with a multidisciplinary group of researchers to identify that photosynthetic algae  can actually cause coral mortality by enhancing microbial activity. The primary trigger for this algal-mediated, microbe-induced interaction  occurs as a result of algae leaking or exuding excess photosynthate or dissolved organic carbon (DOC), as most other primary producers are known to do. Because DOC can be limiting to bacteria, they respond by becoming more abundant as well as increasing their rates of respiration; this can lead to a drawdown in the oxygen levels and the resulting hypoxia causes coral mortality. This is an active area of research that highlights the complexities of species interactions within their natural environment. 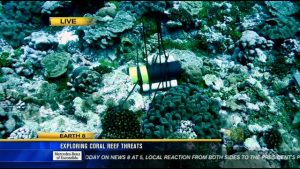 The Smith lab has been dedicated to monitoring global change parameters at key locations around the world. Specifically, the team has long-term Ocean Acidification (OA) monitoring programs on both Palmyra Atoll as well as under the Scripps pier in La Jolla, California. Without long-term datasets, there is no way to track if and how pH and temperature vary both spatially and temporally on the benthos, which is inhabited by key marine organisms such as kelp or reef-building corals. This work will provide a rigorous and comprehensive understanding of how, and to what extent, OA is already affecting marine ecosystems.

To see some highlights of our current research please click here. 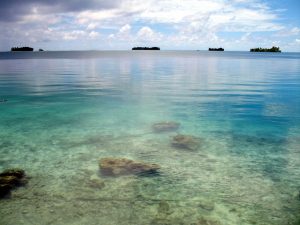 A remote island in the Central Pacific

Former President G. Bush designated one of the largest marine protected areas just prior to leaving office in the remote Central  Pacific in 2008. This new monument contains some of the most untouched and “pristine” coral reefs on the planet. Despite the newly protected status of these remote areas, we know very little about the coral reef communities that inhabit them. We propose to work with a historical set of archived photographic data from the National Oceanic and Atmospheric Administration’s Coral Reef Ecosystem Division to determine the composition of the coral reefs of these new Monuments. We plan to (a) determine whether these remote islands contain some of the most pristine reefs in the US and the world, (b) determine if there is any evidence of climate impacts on these reefs, and (c) using experiments, determine how key aspects of the reef ecosystem differ in comparison to the more degraded reefs that we are accustomed to studying in populated areas.