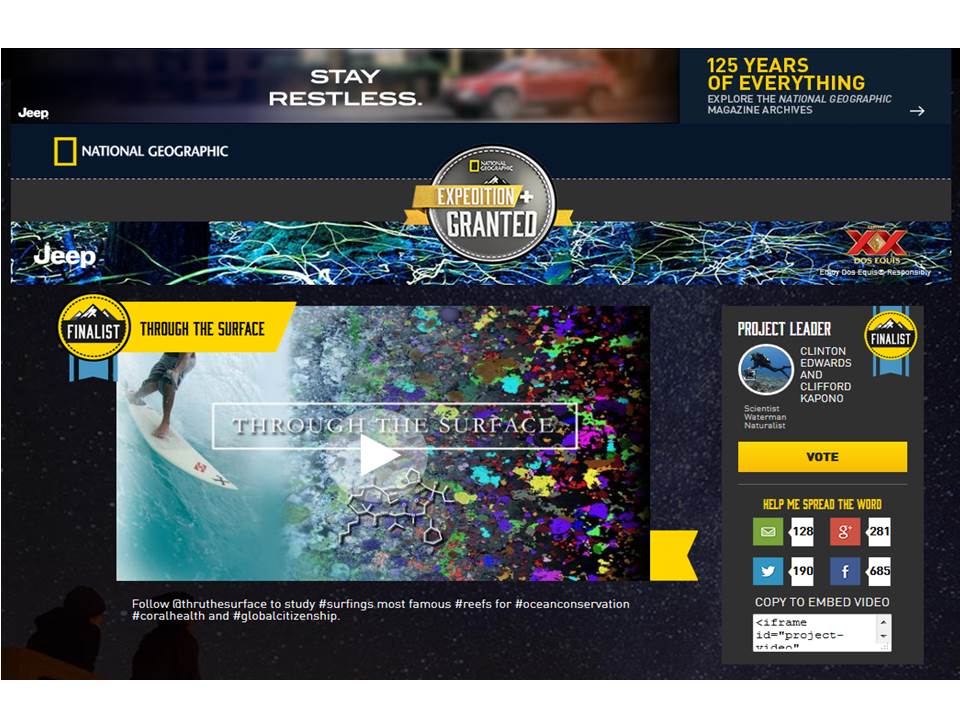 Clinton Edwards and Clifford Kapono from the Scripps Instituition of Oceanography and UCSD, are proposing a 1 year project to visually map (think Google-Earth) the health of the coral reefs under the world’s most famous waves. This project was sent to the National Geographic and their video submission, “Through the Surface” competed with over 700 other projects before being chosen as one of the Top 10 finalists for the Expedition Granted contest!

It is now up to the public, whose votes will determine if they will get the funds and resources to make this expedition happen!

In their short video they propose an expedition to travel to Pipeline, Teahupo’o, P-Pass, Cloudbreak, and an unmarked reef to create massive images (think Google-Earth) that will allow the public see what is really going on under these great surf breaks and educate, engage and raise awareness about the importance of these reefs.

Voting is underway and continues until Sept. 29th.

Please keep reading below to learn more about their project!!

Coral reefs around the world are in dramatic decline and there is urgent need to raise public awareness and participation to support conservation activities against rising threats such as coastal development, overfishing and climate change. Few activities draw as much attention to reefs as surfing and the allure of surfing and the appreciation for the beauty of breaking waves stretches well beyond the surf community. Despite this attention, the structure and health status of the reefs that create these waves are seldom studied by scientists. Surfers and the general public are largely oblivious to changes in reef ecosystems because they simply aren’t able to spend the necessary time studying and exploring to understand the chemical and visual signs of reef health. The vast majority of surfers have never actually seen the reefs they surf over. Further, good waves do not necessarily equate to healthy reefs. As a result, the surf community is under involved in conversations of coral reef conservation. Yet, the health of these reefs directly influence the communities that depend on them. Without a healthy and growing coral ecosystem, the reef will eventually erode and the life it supports will disappear. Given their intimate contact with these reefs, the global surf community is ready to be a powerful advocate if it can be motivated to act. To do this we first need to inspire and educate.

We will use new and groundbreaking large scale (think Google-Earth) underwater photo-mosaic technology to image the reefs at some of the world’s most famous waves including Pipeline, Teahupoo, Cloudbreak and Palikur Pass. Each of these waves are located in areas in critical need of conservation, and we will also visit nearby locations to document both healthy reefs and those in decline. Travelling to these areas will also allow us the opportunity to access nearby locations and compare these well-known waves and reefs to unexploited ones. In turn, informing both scientific and public perspectives of what relatively “pristine” reefs looks like. The products we produce are highly detailed, continuous images of the reef floor and will spark the interest of the surfers who would ride these waves as well as millions of other people around the world who will also be inspired by the images of these reefs. By making these images and information publically available, we will educate surfers and non-surfers alike. We believe that this project will dramatically increase engagement and inspire support for coral reef conservation.

We strongly believe that we can motivate the surf community to become an active and important partner in coral reef conservation. The high resolution photo-mosaic images and chemical profiles of the reefs under world’s most famous surf spots will provide the surfer and non-surfer communities an exciting interactive interface to explore the reefs under their favorite waves. The National Geographic Expedition Granted Award will allow us to see our project successfully exhibited on the world stage and provide the public with impactful and relevant coral reef conservation data. By educating the public through hard science and inspiring imagery we will raise awareness and change the way the people view and ultimately interact with these reefs and inspire change. 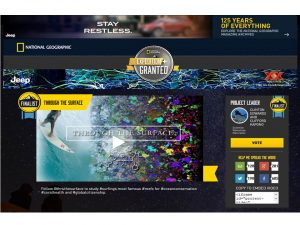