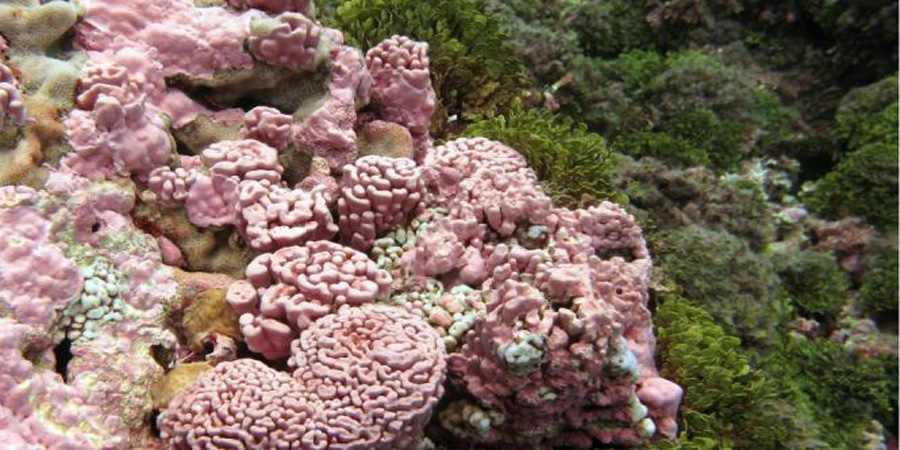 Many species of pink coralline algae, which cements coral reefs together, cover a reef surface in the Southern Line Islands.

Stare at a tide pool and you will often see a crust of pink coating the bottom. No, this is not bubblegum from some careless teenager’s shoe: it’s a stony kind of seaweed that, like other seaweeds, harnesses energy from the sun through photosynthesis. It may not look like the kelps and other leafy seaweeds that we usually think of—but seaweeds, which are a type of algae, come in a wide variety of colors, sizes, shapes and textures.

These pink stony crusts are found in sunlit parts of the seafloor from the poles to the tropics, and collectively are called crustose coralline algae. Crustose coralline algae play a variety of important roles in many marine ecosystems, particularly coral reefs. We call them coral reefs because their three-dimensional structures are built by stony coral animals, which produce limestone as they grow ever upwards towards the sun. Corals may create the major structures—the bricks of the reef, if you will—but no brick wall will stand strong without cement. Enter our unassuming friends the crustose coralline algae. They grow as a crust over and between the fragments and gaps in coral reefs and essentially cement the coral bricks together. You might think of these pink crusts as the silent masons of coral reefs, the underdogs hidden in the shadow of the more charismatic stony corals.

Close examination of the structure of crustose coralline algae (using a scanning electron microscope) reveals an internal structure that looks like a honeycomb. Limestone lines the walls of individual cells of the algae, which stack up to form the hard crust. As layer upon layer of algae grow over one another and over the surface of the porous reef, the foundation of the coral reef grows stronger. These crusts grow slowly—often just 0.4 to 1.2 inches (10 to 30 mm) per year—and depend on grazing fish to clear them of rapidly growing fleshy seaweeds, which threaten to smother both the coralline algae and the coral. This cleaning is not only important for the living crusts themselves—it also helps baby corals, which often prefer to settle on the clean pink surfaces. In places with rough waves, too rough for corals to survive, crustose coralline algae are the primary reef builders.

During a recent cruise to the Southern Line Islands, I, along with other researchers from the Scripps Institution of Oceanography, had the opportunity to sample coralline algae across this Pacific island chain. These nearly pristine reefs have large numbers of grazing fish, which means that any non-coral surface is likely to be covered with the crusty pink algae. We noted that the Southern Line Islands are host to a wide diversity of coralline species. The most charismatic of them all was found at Starbuck Island, where pillars of thick, bubblegum-colored coralline algae (Hydrolithon craspedium) coated any available space on the bottom. To collect these specimens, researchers had to use hammers and chisels to pry the 2-inch thick algae off of the reef. That is some effective reef cement!

So from now on when you think of coral reefs, don’t forget about the stealthy coralline algae that toil in the shadows of corals, strengthening and enriching the coral reef habitat.

Editor’s note: This blog is part of a series inspired by the 2013 Expedition to the Southern Line Islands led by scientists from the Scripps Institution of Oceanography and from San Diego State University. For more information about the expedition visit: http://coralreefsystems.org/

To see the original article from the Smithsonian Institution’s Ocean Portal, click here

You can also check out the interview with Maggie Johnson here!