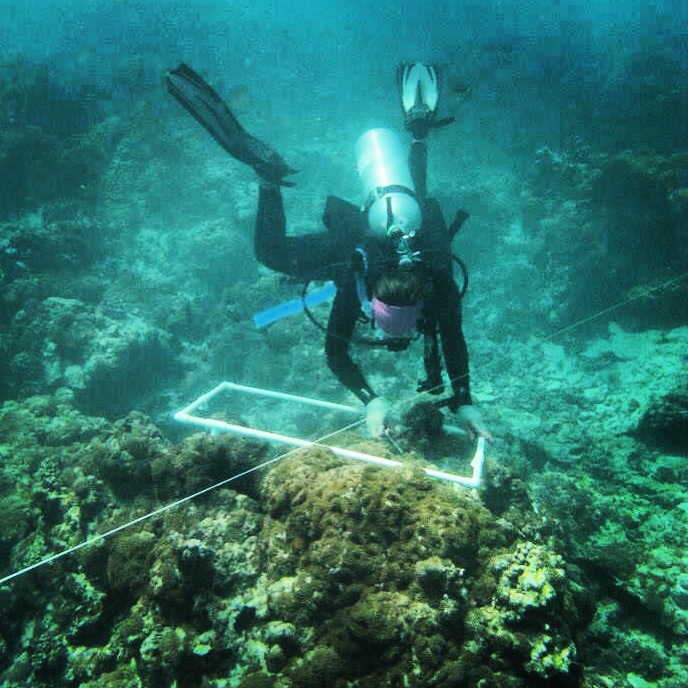 Nickednamed the “Scripps Ladies,” Smith Lab members Amanda Carter and Maggie Johnson, along with Sandin Lab member Kate Furby spent 3 weeks of their summer in Palmyra, a uninhabited atoll part of the Line Islands in the Northern Pacific.  The Sandin and Smith Lab of UCSD/SIO have had ongoing research in the Line Islands for years, studying “baseline” coral reefs (coral reefs with little to no human disturbance) to develop more efficient ways to manage coral reefs around the world today.  Master’s Student Amanda Carter, gives us an “insider’s” perspective of what these coral reef ecology labs do best. 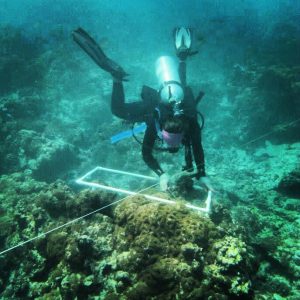 The Scripps ladies have returned to home base in sunny San Diego and are enjoying the hot, humid weather that reminds us of Palmyra. Although it never feels like there is enough time, the last week of our field season was hugely productive. We succeeded in installing permanent photo transects in three additional directions radiating out from the Longliner wreck. The transect installations involved lots of work and the destruction of Amanda’s hands (now referred to as “Mitts”) but the end result was well worth the effort.  There are now permanent transects heading out from the wreck in all four cardinal directions, allowing for long term monitoring of the reefs recovery after the wreck has been removed.Additionally, we repeated Greta Aeby and Thierry Work’s diver tows around the wreck to further determine the spread of the corallimorph across the reef terrace. This involved Kate driving the boat, Maggie manning the GPS, and Amanda being towed behind the boat like shark bait – an exciting experience for everybody (especially in wind chop). 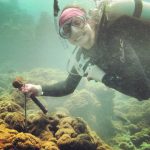 In addition to the new transects, we were able to find and repeat almost all of the 2010 long term monitoring transects laid out by Gareth Williams, Amanda Pollock, et al. and re-photograph the sites to provide a second time point. Finding the transects was a treasure hunt for CCA and corallimorph covered steel eye bolts on the bottom of the reef – it turns out that Kate has an eagle eye for hidden eye bolts and now has a career to fall back on if the PhD thing doesn’t work out. We were also able to collect numerous table Acropora samples for Kate’s work and added some growth tiles at a number of sites so that Maggie can return and perform some reciprocal transplant work on the reef terrace.

Meanwhile, back on (sort of) dry land… 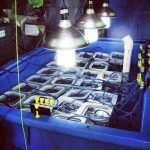 After hauling innumerous buckets of water from the reef terrace back to the lab, Amanda’s growth experiment went smoothly (despite some corallimorph dissolution) and Amanda is busy analyzing the results back in the lab. Amanda and Maggie had the opportunity to present at U.S. Fish and Wildlife Service in Honolulu (Thanks, Meg!) to talk to the staff about the work we’re doing regarding the corallimorph invasion at Palmyra. The talk was well-received and the staff provided some valuable insight and suggestions regarding Amanda’s thesis work. The resident toxicologist also confirmed Amanda’s suspicions that the levels of metal were simply too high for some of the corallimorphs in the small incubation chambers which led to the dissolution that was seen. More on that to come soon!

All in all, it was a hugely successful field season for us and it was made possible thanks to the wonderful staff and crew at Palmyra and our awesome colleagues that were on base with us. We miss everyone already and hope to be back soon! 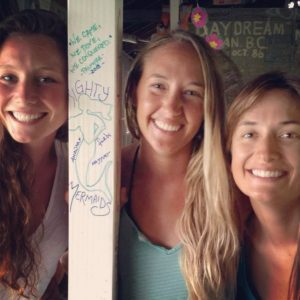