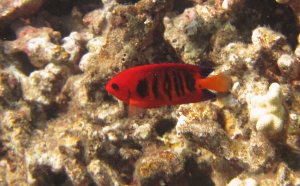 I have recently had the chance to photograph a few rare stars on the reef. 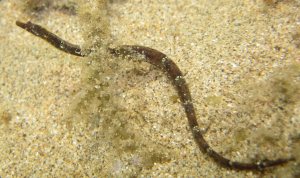 This was a rare find.  My buddy, Don, spotted a mated pair in Kaanapali and took some great shots.  When he contacted the fish experts in Hawaii to confirm his ID, Don learned that he had the first and only pictures of these fish ever taken in the wild.  It was a real treat for Don to invite me down to see the rare pair in person, and perhaps be the second person to ever film these guys in their natural habitat.

This is a difficult fish to film.  Not only are they rare on the reef (have only seen one during my 300 dives out here), but they are also great at dancing and dodging into & out of the reef at a rapid pace, seldom holding still to flaunt the beautiful reds, yellows & turquoises their mamma gave them.   Despite their nymph-like agility, patience paid off and I final captured a few decent shots of this remarkable fish.  These are prime targets for aquarium collectors, but I’m glad this little guy has escaped their nets thus far.

Called the Turkey Fish by Hoover (but not Randall), this little guy is related to real lionfish and can provide quite the nasty wound with its venomous spines.  Despite this fact, it’s quite a cute little fish.

If you want to learn more about Levi and his research in Maui check out his blog!