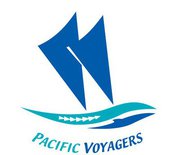 In a recent effort to celebrate Polynesian culture and bring attention to the importance of perserving our oceans, a group known as the Pacific Voyagers have embarked on a sailing expedition (using traditional vessels: vaka moana) from New Zealand, through the South Pacific, to Hawaii, and across to San Francisco, and now San Diego, California.

On Tuesday, this intrepid group of explorers and cultural leaders visited the Birch Aquarium where Drs. Richard Summerville, Stuart Sandin, and Jennifer Smith (my advisor) spoke with them about climate change, overfishing, and preserving coral reef ecosystems. In addition, some of us students were invited to attend, and we had the chance to speak with The Voyagers one-on-one—an amazing experience! 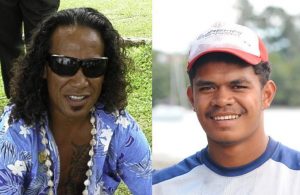 A couple of our most notable conversations were with Brown Apera Makea from the Cook Islands (left) and Nabil Mercy Kafalava from Tonga (right).

Brown told us about his experiences building boats and being a tour guide; and also some hair-raising stories about being at sea.  Mercy (one of the youngest voyagers) explained his love of Shakespeare, and also explained to me why they can’t simply navigate using the ipod constellation app.  These two men exemplified the collective passion for people, education, and the ocean that all the Pacific Voyagers represent.  They are an inspiration to their own people and the world.

SAN DIEGO – January 17, 2012 – After winterizing its fleet ofenvironmentally-sustainable vakas (canoes) in San Diego for the last six months, the Pacific Voyagers will depart “America’s Finest City” on January 24 to complete the next leg of their 10,000 mile journey across the Pacific. To honor the Pacific Voyagers, San Diego’s Pacific Islander and indigenous Native American communities will host a traditional Polynesian farewell ceremony on Saturday, January 21st at 10 a.m. at Spanish Landing Park.

As a part of the traditional farewell ceremony, each of the Pacific Islander communities, the Kumeyaay nation, and friends and family will have the opportunity to present the Pacific Voyagers with a gift, prayer, blessing, chant, or dance – and wish them well on the next leg of their journey. The public is welcome to attend.

Following the ceremony from noon to 3 p.m., there will be a celebration hosted by San Diego’s Pacific Islander and indigenous Native American communities, including a Polynesian barbecue to feed the Pacific Voyagers and honored guests.

Upon leaving San Diego, the Pacific Voyagers will continue their voyage to Cabo San Lucas, Costa Rica’s Cocos Islands, the Galapagos, the Marquesas and Tahiti and then will conclude their journey at the Festival of the Pacific Arts in the Solomon Islands in July 2012.

About the Pacific Voyagers:

The Pacific Voyagers are a network of sailors from various Pacific Islands including Aotearoa, Cook Islands, Fiji, Samoa, Tahiti, Kiribas, Papua New Guinea, Solomon Islands, Tonga, Hawaii and Vanuatu.  The entire fleet is eco-friendly, powered only by wind and sun giving them freedom of movement without any realiance on fossil fuels. Pacific Voyaging began when the world’s first seafarers set off in vaka moanas, ocean going double hulled canoes, from Asia, most likely Taiwan, in the hopes of finding other lands. They found New Guinea, the Bismarck Archipelago, and the Solomon Islands first. Thousands of years later, the ancestors continued their journey and within 2500 years they reached the more remote Hawaiian Islands, Rapanui, and Aotearoa, establishing communities at each location with the root crops, fruit seeds, and domestic animals they carried on their voyage.  For more information and to track their journey, please visit www.pacificvoyagers.com