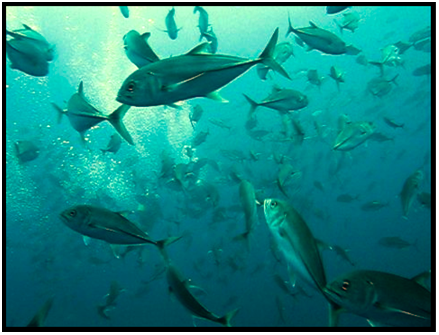 This is a blog post by Levi Lewis, a PhD student in our lab, that follows his diving experience at Kingman Reef in the Line Islands.

“Getting it at Kingman Reef”
By Levi Lewis

﻿“Okay, I get it.”  Dr. Sandin (fish team) was wondering what I thought of my first dive on Kingman Reef, one of the most remote and pristine coral reef ecosystems in the world.  As a new member of the coral reef lab at Scripps Institution of Oceanography, this was an exciting opportunity for me to witness all that I’ve heard and read regarding intact reef ecosystems.

My first dive of the trip was in the Kingman lagoon.  I rolled off the port side of our inflatable, splashing into a foreign world few humans have ever seen.  As I surveyed the landscape dotted in massive yellow mushroom-like mounds of lobe corals, I spotted the natives arriving to greet me—three grey reef sharks.  They examined me as I would expect Native Americans to have examined European explorers upon their arrival to the New World.  We could not communicate, though it was clear they wanted to know a few things:  “Who are you? What are you? What are your intentions? What is that shiny thing you‘re pointing at us?”  My only response was to continue aiming the camera at them, partially in excitement to get my first sharks on film, also to put something hard between myself and their concealed weaponry.  It felt, in part, a standoff and, in part, a warm welcome.  Regardless, I was happy to see them.

After three days of diving, I could write about these reefs ad infinitum:  the schools of crimson fang-toothed bohar snappers and their piercing yellow eyes; species-rich coral spires stacked high towards the sea’s surface;  the chaotic vortex of metallic jacks that swallowed me alive; an open-water plankton bloom that  fueled countless salps, ctenophores and barrel-rolling mantas; the infinite schools of convict tangs that coated the reefs, grazing frantically on…hmm, there seemed to be a lack of fleshy algae on the reef. 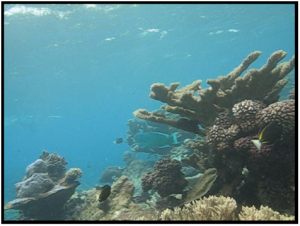 We traveled 4,000 miles to get here for a reason:  it is the only way we could really get it; “it” being an understanding of how coral reef ecosystems should look and function in the absence of local human impacts.  Though I understood much of this in my head, seeing the reef helped me truly get it in my core.  Through our science and outreach, we hope society, too, will begin to get it.