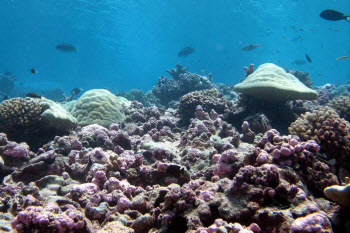 by Katie Barott, member of the Microbe Team

The corals are winning here at Kingman Reef. Photograph by Jen Smith.

Life on the reef is a constant battle for survival. For corals, the struggle begins as soon as the coral larva attaches itself to something on the bottom and starts to establish some space for itself. No space on the bottom is unoccupied. Every location is colonized by some kind of organism, be it corals, algae, sponges, or clams.Corals are superb fighters. They fend off encroaching corals by stinging them with their tentacles and by ejecting their stomachs to digest them. These coral-coral battle zones are easy to spot; when two different corals meet, there’s often a cleared band between the two where they’ve killed each other off. The same tactics are put to use to fight off invading algae. On healthy reefs, corals can maintain their territory, often beating back and even killing various types of algae. On degraded reefs, the tables are turned. Here the algae are the superior competitors with their own arsenal of weapons including chemical poisons and introducing bacteria that make the coral sick. Sometimes they directly overgrow and smother the coral.

On this expedition, we’ve been quantifying the interactions between corals and algae, documenting how many types of algae the corals are battling and who is winning at each of the atolls. On some of the human-impacted reefs, there are so few corals and so much algae that our surveys take only ~10 minutes each instead of the usual 45. At the more pristine sites we’ve seen beautiful reefs dominated by so many corals that our hands cramp up before we can write down all of the different coral species and the numbers of algal interactions. Although the algae don’t dominate here, they are still present, lurking in the crevices and along the edges of the coral colonies. Even on a healthy reef the corals have to continually stand their ground against the algae, but on these reefs the corals are winning.