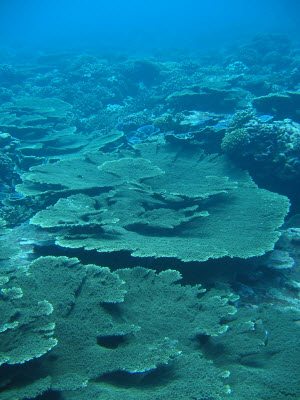 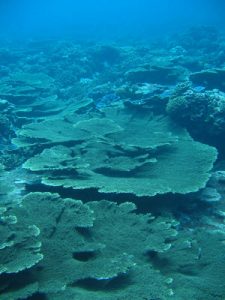 Luxuriant and extensive live coral cover on the Fanning (Tabuaeran) western fore-reef south of the pass.

To a Paleo-Benthic, today’s coral reefs are rich in clues about their past and offer hints as to their future. Atolls such as those that make up the Line Islands are built of the dead skeletons of corals, foraminifera, and calcifying algae. Beneath the deep layers of marine skeletal debris is the old, extinct volcano that gave rise to the island originally. As the volcanoes age and cool, they sink deeper. The islands keep up with this sinking by growing upwards thanks to the constant supply of new skeletons produced by living corals, foraminifera, and calcareous algae. If natural or human disturbances cause the die-off of these organisms, the supply of atoll-building materials will decrease. Coupled with sea-level rise, this could spell disaster for the marine, terrestrial, and human communities living on coral atolls like these. This is yet another reason healthy, living coral reef communities are so important.

Fanning (Tabuaeran) Atoll, a recent port of call, was an interesting study in contrasts. Its lagoon is huge (110 km2compared to only 34 km2 of land), and most of the lagoon water is exchanged through a single passage on the western (leeward) side of the atoll. This creates amazingly strong currents—up to 3 or 4 knots—and huge standing waves during the peak incoming and outgoing tides. This jet of water seems to act as a barrier between the reefs on the northern and southern sides of the pass. South of the pass, the coral cover was spectacular, covering around 80% of the substrate. Gigantic plates of Acropora and multicolor whorls of Montipora blanketed the bottom.

In contrast, north of the pass much of the coral is dead. Our “death assemblage” surveys indicate that the coral community was at one time similar to that on the gorgeous southern side. Nevertheless, now the corals are dead and covered with dense mats of cyanobacteria. Moving further north towards a shipwreck that occurred approximately 40 years ago halfway up the northern leeward side, the percentage of dead corals increases to about 99.5%. Something about the shipwreck seems to be killing the corals—probably pathogenic microbes fueled by the rusting ship. (For more details, see the earlier blog posts about the shipwreck sites at Fanning and Kingman.) The really shocking part is the extent of the mortality caused by this shipwreck—the reef is dead and black more than a kilometer north and south of the wreck.
Our team was also able to investigate the coral community on the eastern side of the atoll. In 2005, paleo-benthic Jessica Carilli visited Fanning with another team of scientists and snorkeled at many sites around the atoll. At that time she noted that aside from the luxuriant coral south of the pass, most of the corals were dead. During our dive on the east side of the atoll on this expedition, we found live coral cover in the range of 40-50%. Most of the colonies were smaller than the corals in the southwest. Perhaps we are seeing recovery on the windward side of the island after a massive mortality event—maybe the 1998 bleaching event, or possibly a major storm. Either of these events could have spared the leeward reefs due to the local topography and oceanographic conditions. Storms tend to come from the east here, the windward side, so the leeward side generally escapes major damage. The prevailing currents also flow from east to west. The island’s mass disturbs this smooth flow, causing turbulence and upwelling of deep, cool water on the leeward side. During a major bleaching event, when the east side of the island is bathed in exceptionally warm water, the western reefs may be spared that heat stress due to this “island wake” upwelling.

Our team can test these hypotheses by determining the dates when coral colonies died on the eastern and western sides. If those on the eastern side did in fact die in a mass mortality event that spared those on the west, many of the dead colonies that we sampled on the eastern reef will show very similar “last alive” dates, whereas those on the western (leeward) reefs would have variable “last alive” dates reflecting the constant natural turnover. Furthermore, bleaching events leave a record in the form of anomalous growth bands in massive Porites corals. Thus, if the Porites corals on the western side escaped the bleaching event, those anomalous bands will be absent from the cores that we obtained from them.

And the answer is? Patience. The rules of the paleo-benthic game are: Drill, sample, and measure now. Get answers later.