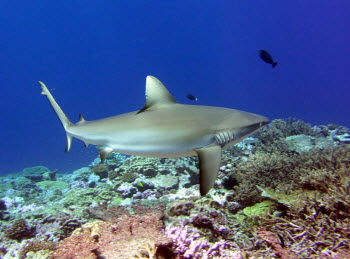 A bohar snapper (Lutjanus bohar), with fangs, at Kingman. These fearless, curious clowns of the reef habitually nip us or our dive gear, and will pick up and chew anything we leave on the reef. Photograph by Jen Smith.

Charles Darwin saw a world that was dynamic, changing, evolving. On his voyages in the Pacific he was struck by the geology of the myriad islands and doughnut-shaped atolls there. He was the first to connect the dots and realize that they all represented snapshots taken at different stages in a geological progression. Each had been born as a high volcanic island that became encircled by coral reefs. Over time, the islands eroded and the sea floor sank (subsided, in geology speak), while the corals continued to build the reefs upward to stay in the sunlit zone. Eventually, the land disappeared beneath the waves, leaving only a reef as a clue to its past. Kingman Reef is one such relic. By the time humans arrived in the Line Islands, only about three acres of land remained, all of which is awash most of the time. Without land suitable for settlement or airstrip construction, and lacking guano deposits or other usefulness, Kingman has been left alone—actually avoided as it poses a hazard to shipping. Being useless, it has proven to be extraordinarily useful for coral reef researchers today.

Free of current local human impacts, and without Palmyra’s history of military occupation, Kingman provides a near-pristine reef for study. Near-pristine, because no reef is remote enough to completely escape the fallout from our activities. Kingman, like all the others, is subject to the global effects of rising atmospheric CO2, including increased ocean acidity. There is also the endless stream of plastic trash brought from distant lands by ocean currents and that now accumulates on the windward face of the reef.

Nevertheless, the reef at Kingman is nothing short of stunning for those accustomed to the degraded coral reefs of today. It, along with a handful of other near-pristine reefs in the Phoenix and Southern Line Islands, gives us a glimpse into the past. We know from the reports of the early explorers that the reef waters were thick with large animals: sharks, sea turtles, groupers, to name a few. Kingman is a reminder that most of us, coral reef scientists included, don’t know what a healthy coral reef looks like because we have never seen one. Our first visit to a coral reef becomes the “normal” against which we compare future reefs. With each generation, our baseline for comparison shifts toward a more degraded state. Kingman forces us to reset our baseline.

Because even near-pristine reefs are now so rare, Kingman has taken on great importance as a research site. Data collected here during the 2005 expedition provided new insights for our understanding of coral reef ecology, some of which will be discussed in future posts. Based on those observations, the reef at Kingman was made the gold standard used when calculating the CHI for coral reefs around the world. (To learn more about the CHI, the Coral Health Index, check out this earlier post.)

Late on Friday the Hanse Explorer brought the research teams the 67 km from Palmyra to Kingman, and yesterday the researchers started their work here. Time is short. There is much to be counted, measured, sampled, and simply observed. But for today—Halloween—for the researchers going overboard at Kingman, it is a treat.

On our first day on Kingman, we dove the western terrace. This the side of the atoll that is sinking. This is also the side where the predominant current runs onto the reef and creates an upwelling. The nutrient-rich upwelling in turn feeds the plankton, which attract everything else. Coral cover is incredible, probably over 60%. There are schools of iridescent ctenophores [comb jellies], and the mantas are all over the place, twisting and turning to feed on all the things floating in the water column. We saw at least ten in just one dive. My dive partner and I were literally surrounded by a wall of big eye jacks.

Read more from the field at: http://coralreefsystems.org