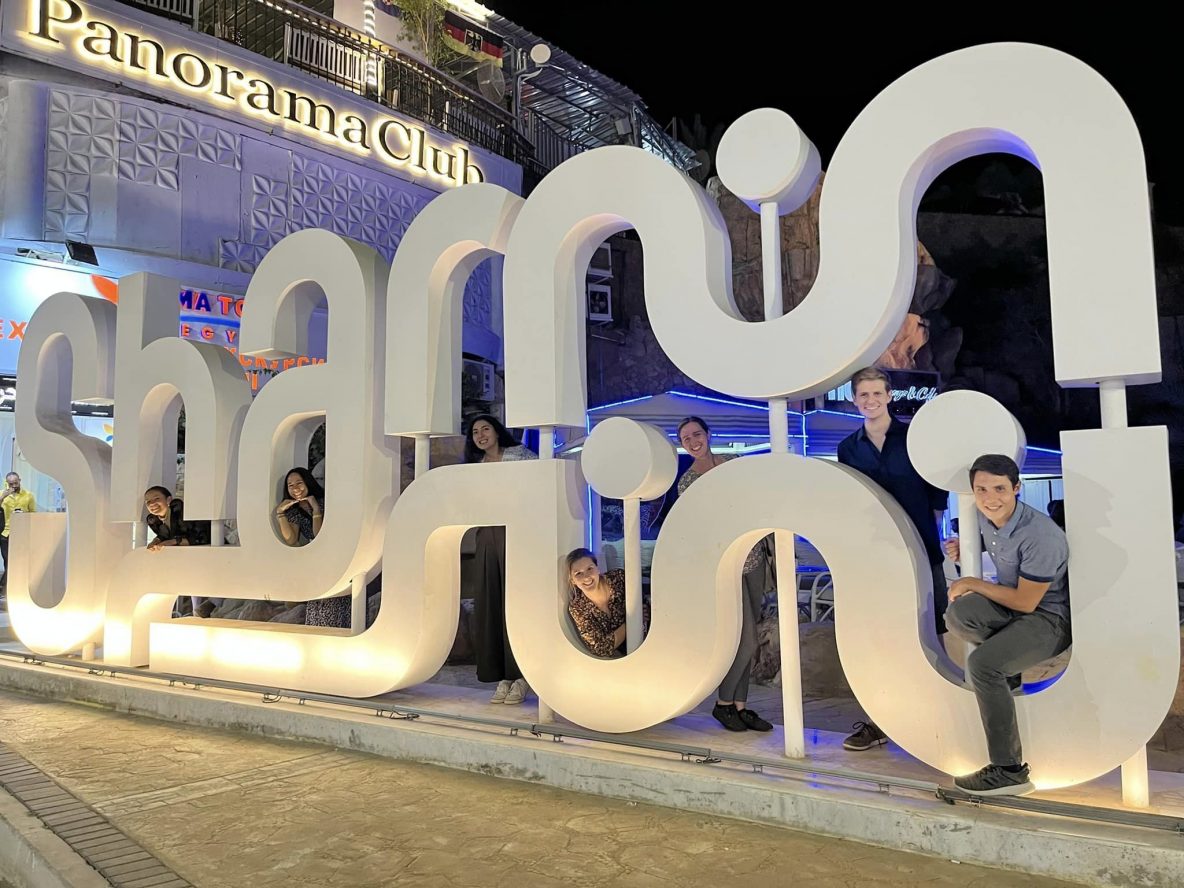 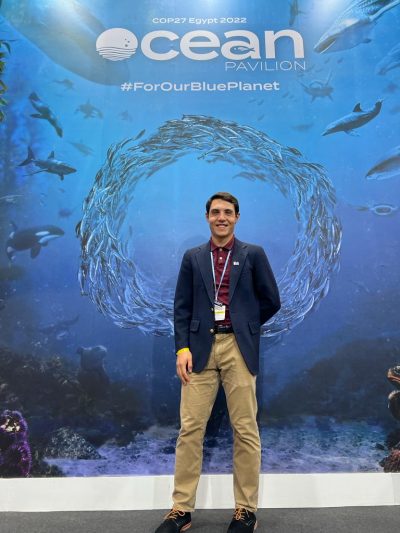 A few weeks ago, I returned from the UN climate conference, also known as the 27th Conference of Parties (COP 27), which was held in Sharm El Sheikh, Egypt this November. I was lucky enough to attend as part of the University of California’s observer delegation along with more than a dozen other students from Scripps Institution of Oceanography. As a coral reef ecologist and aspiring ocean policy wonk, the global conference was a fascinating and immersive experience. As someone who had never been to Egypt before, it was the trip of a lifetime. And as a global citizen that cares deeply about fighting climate change, it painted a revealing portrait of collective action (and inaction) to mitigate our impact on the climate.

This this was the 27th time that world leaders and negotiators from all over the world have convened to discuss global action to address human-caused climate change. Previous iterations of COP have yielded major progress toward this goal, such as COP 21 where countries ratified the Paris Agreement, an aspirational goal of limiting global warming to 1.5°C. More recently, COPs have served as a forum for leaders to demonstrate their country’s commitment to climate action by pledging steps to reduce emissions and highlighting the progress they’ve made thus far. Importantly, national commitments made in the wake of the Paris Agreement to reduce emissions (known as Nationally Determined Contributions, or NDCs) will need to be updated every 5 years, and the annual COP meetings serve as a forum for this continued progress. In addition to climate mitigation, adaptation and equity were big topics at COP this year. In particular, much of the conference focused on “loss and damage”, a.k.a. compensation for low-income countries that are already suffering irreversible adverse impacts from climate change. Examples of this loss and damage were wide ranging, from the devastating flooding that impacted Pakistan this year to the potential erasure of some small island nations due to sea level rise.

The scale of the UN meeting was as daunting as the agenda it set out to cover. Approximately 45,000 people convened in Sharm El Sheikh, a remote desert resort town on the coast of the Red Sea. Inside makeshift and overly airconditioned tents, negotiators, observers, protesters, and members of the press zipped between meetings and panel discussions. Half of the conference venue was dedicated to the UN negotiations themselves, where diplomats haggled over the highly technical and evolving wording of various global agreements. Decisions in this forum are reached by consensus, which means that international politics and diplomacy were behind every proposed decision, even those as mundane as the addition or subtraction of a comma.

On the other side of the conference venue, thousands of conference attendees jostled between dozens of “pavilions” where countries and civil society organizations hosted panel discussions on various topics related to climate mitigation and adaptation. This year, Scripps Institution of Oceanography and Woods Hole Oceanographic Institution jointly-hosted COP’s first ever Oceans Pavilion, which featured talks on the role of ocean observing in climate modeling, the impact of shipping on global emissions, the value of coastal ecosystems for mitigating greenhouse gas emissions, the vulnerability of ocean ecosystems to climate change, and the lived experience of young climate advocates. Unlike a science conference, there were few (if any) forums to present the results of specific research projects or novel scientific findings. Instead, talks were more interdisciplinary (focused on policy, finance, capacity building, mitigation, promoting youth and indigenous voices) and tended to be more high level and largely aspirational. 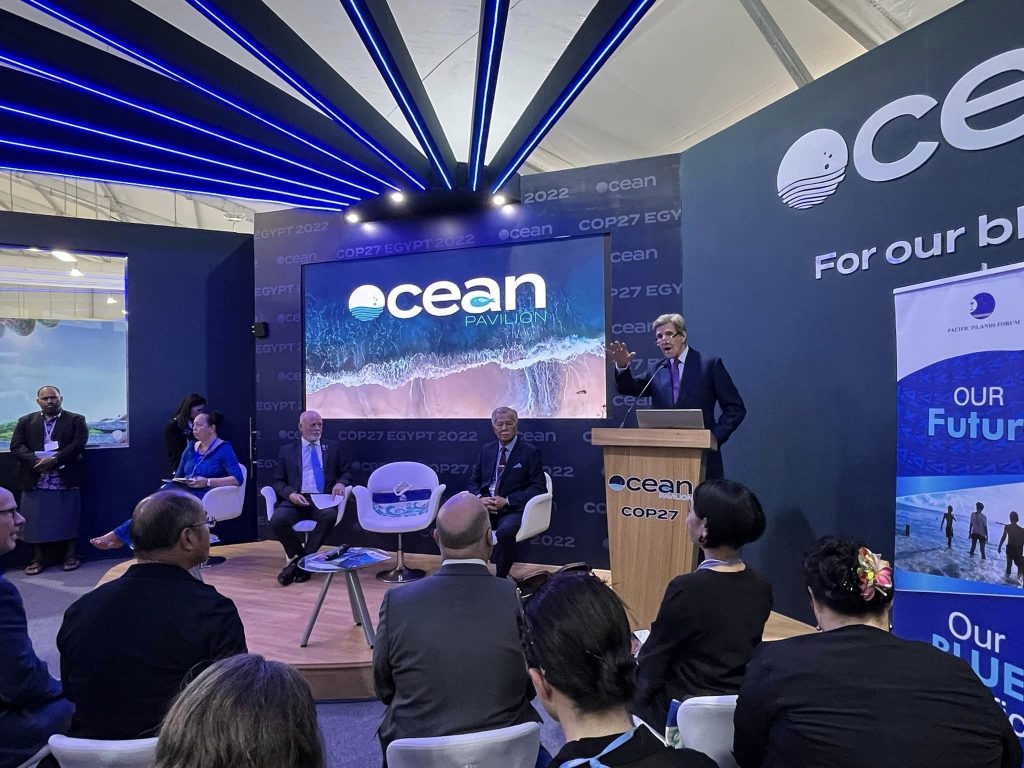 We spent much of our time shuttling between talks at different pavilions and helping to staff the Oceans Pavilion, dropping in on official negotiations here and there. One major takeaway was that everyone was on the same page (at least superficially) that climate action is urgently needed, but approached the negotiations with different priorities and levels of urgency. We noticed striking examples of greenwashing, such as by countries like the United Arab Emirates (UAE) and Saudi Arabia, that were promoting their progress on reducing emissions while completely glossing over the role of their massive state-run fossil fuel industries (This COP was derided for having a record-setting number of fossil fuel lobbyists in attendance, a trend that can only be expected to increase with the UAE set to host COP 28). Conversely, we witnessed passionate pleas for swift climate action and demands for climate justice from groups that stand to lose the most if climate change surpasses 1.5°C, including small island states, developing nations, indigenous groups, and young activists.

For its part, the United States, which oscillates between climate action and denial depending on the current political climate at home, preached the need for bold action but also implicitly discouraged disruption of the status quo. For example, the US continually emphasized the importance of relying on private sector investments in climate mitigation, claiming that no country in the world could finance climate mitigation with tax dollars alone. While this may be true, the reluctance of the world’s largest economy to call for more public funds to fight climate change was disappointing, particularly given how much public money is allocated to other causes, such as the military. For his part, President Biden highlighted the progress the US has made recently toward serious climate mitigation, touting the Inflation Reduction Act and the ratification of the Kigali Amendment. However, the self-aggrandizing speech lacked a call to action for the other nations in attendance to raise their level of climate ambition. Regardless, it was exciting to see global dignitaries in person, such as the UN Secretary General António Guterres, as well as famous US politicians such as President Joe Biden, Nancy Pelosi, Al Gore (who gave a fiery speech at the opening plenary) and John Kerry. 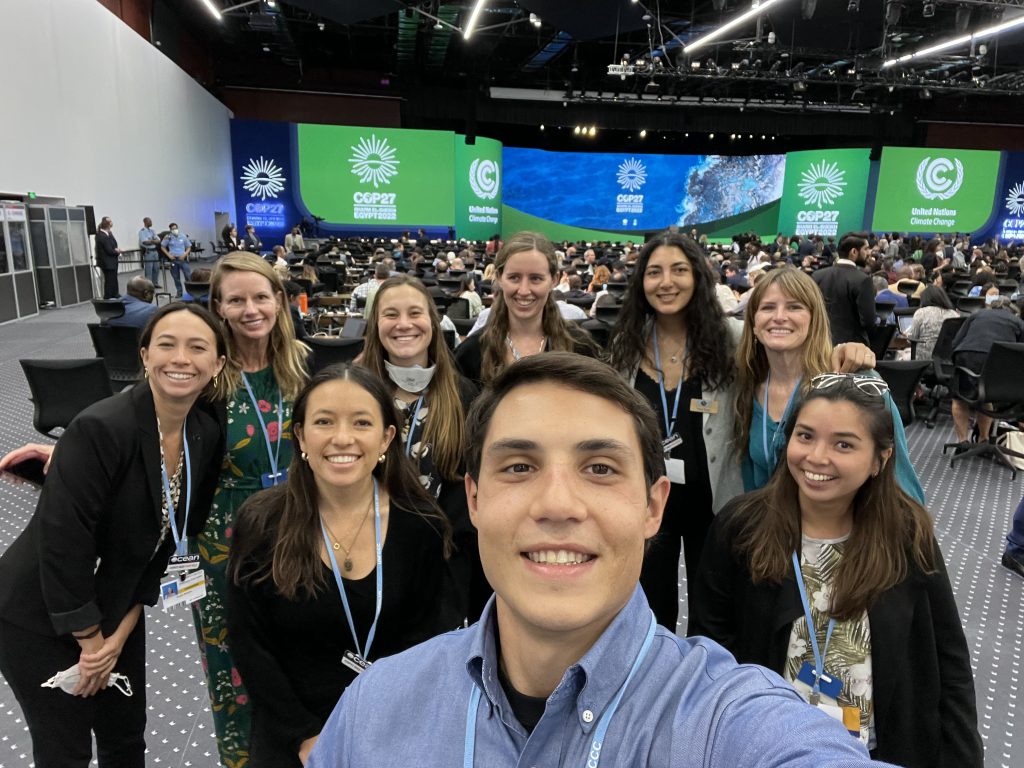 We left the two-week conference at the halfway point, but we continued following the developments from afar as negotiators worked into overtime to reach agreement on numerous provisions. The major breakthrough this year was an agreement to create a fund to support “loss and damage” faced by vulnerable countries, a significant step toward climate justice. This was a breakthrough after the US signaled a willingness to consider the proposal, despite longstanding objections. While the fund was established during the final hours of COP 27, no money was allocated to the fund (that will be a decision left to future COPs). Aside from loss and damage, little progress was made on enhancing global commitments to reduce emissions, and countries were unable to agree to language calling for a global phase out of fossil fuels. The mixed outcome of COP 27 highlights that climate change touches all nations, but does not do so equally, and reiterated the limitations of collective action for swift, global change. There will be much unfinished work to tackle at COP 28.

On the margins of COP27, I was fortunate enough to get the opportunity to dive and snorkel in the Red Sea. While the land surrounding Sharm El Sheikh is desolate and barren, the scene beneath the waves is another story. We swam through reefs teeming with health corals and large fish, and saw incredible diversity of species, including functionally important groups such as parrotfish in high abundance. The dive operators told us that the reefs look just as good now as they did decades ago, despite having some of the warmest and saltiest waters of reefs anywhere on the planet. In this regard, the Red Sea is a sign of hope. Hope that coral reefs and other vulnerable ecosystems will have the capacity to adapt. This adaptation is not a substitute for global climate action. But adaptive capacity will be necessary for these ecosystems to persist, even under reduced emissions scenarios. Despite the mixed outcomes of the conference, the resilient reefs of the Red Sea left me hopeful for a bright future ahead. 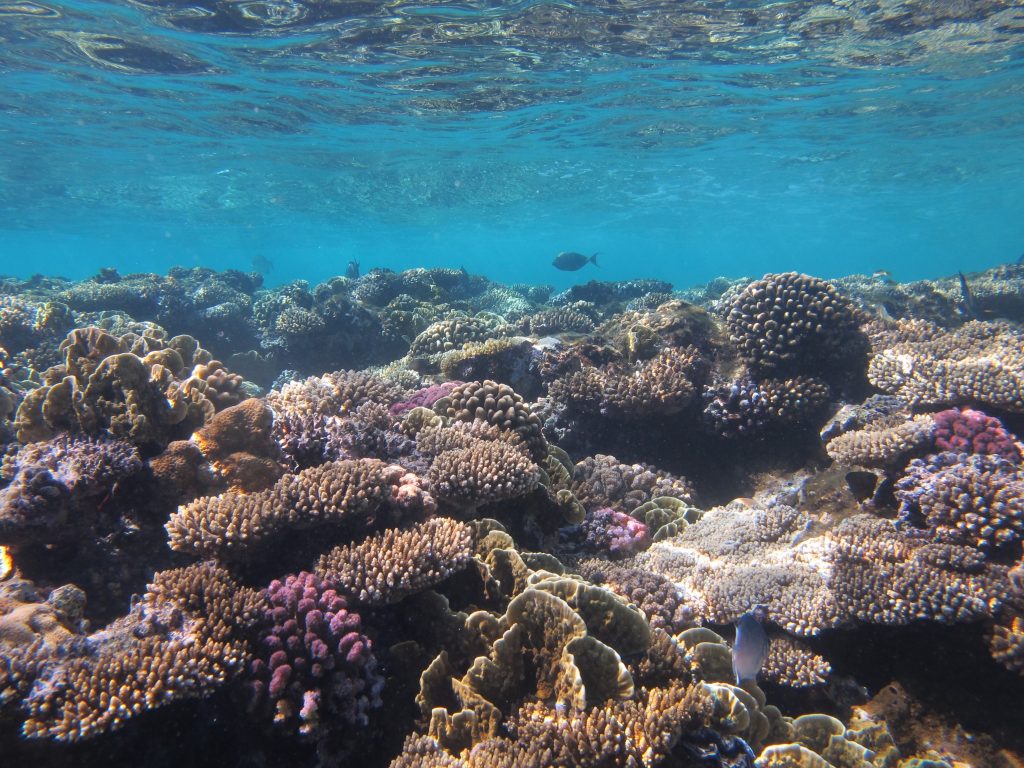