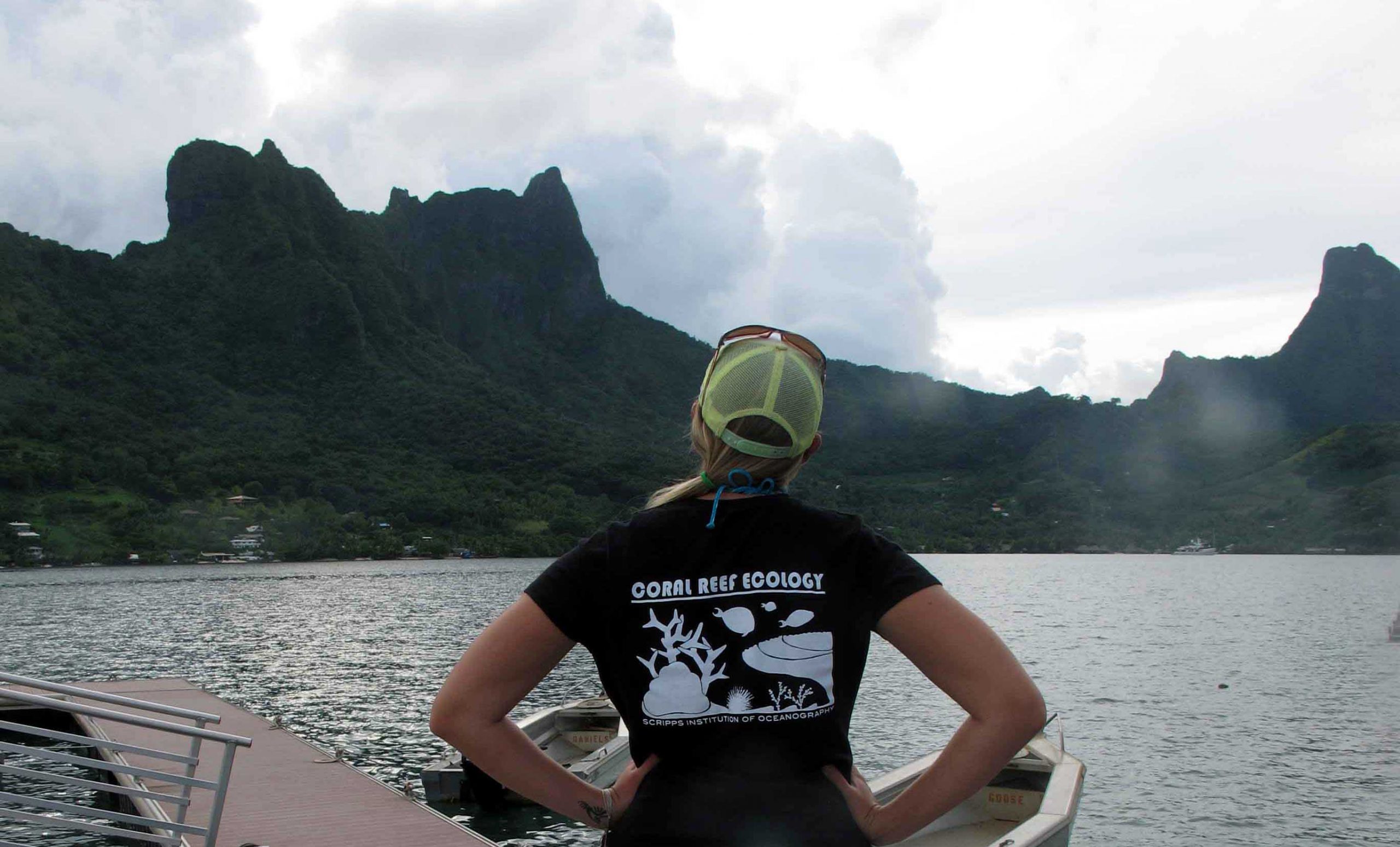 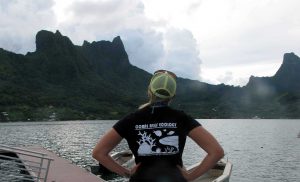 My field work entails a combination of field and laboratory experiments. Field work is utterly exhausting; working in and on the water for all daylight hours and then in the lab for what remains of the day. But one of the things I love the most about being a marine biologist with field based research is the opportunity to travel and essentially live on the reefs I study. I am back at the Smith lab after an epic 6 months in the field. This last push to collect data for my dissertation involved 3 weeks on Palmyra Atoll, followed by 3 months on Coconut Island at the Hawaii Institute of Marine Biology, and then 1.5 months in Moorea, French Polynesia. My head is still spinning from the travel and long hours in the field, and as the dust settles and I collect my thoughts, I think back to these unique places. With memories of each reef still fresh in mind, I can’t help but think that a coral reef is not a coral reef… is not a coral reef. Spending hours underwater on each reef every day for weeks on end really gave me the chance to realize how different, and yet how similar, coral reefs across the ocean can be.

My research trip started off with the Smith lab research expedition to Palmyra Atoll in the Northern Line Islands (http://www.palmyraresearch.org/). Palmyra Atoll in uninhabited, except for a small research station that maintains not more than 30 staff and researchers at a time. The isolated nature of the atoll, roughly 1,000 miles south of Hawaii, make it the ideal location to study coral reefs in the absence of direct local human impacts. Jumping in the water at Palmyra, you’re likely to see lots of top predators, like sharks and jacks, and the bottom covered by a wide variety of coral species and calcifying algae. These reefs are generally considered among the healthiest coral reefs remaining on the planet. 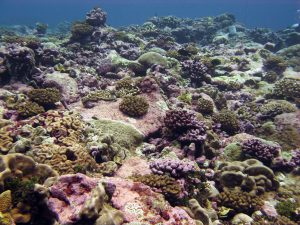 The fore reef off the northwestern tip of Palmyra Atoll 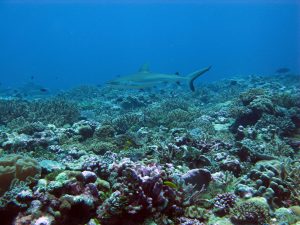 The shallow reef terrace with many different corals and top predators.

The next stop on the tour du tropical Pacific was Coconut Island located in Kaneohe Bay on the island of Oahu. I had the pleasure to work as a visiting research in the lab of Dr. Ruth Gates (http://www2.hawaii.edu/~rgates/Gates_Lab_Website/Gates_Lab.html). The reefs of Kaneohe Bay are in stark contrast to Palmyra, partly due to major differences in the origin and types of reef (Palmyra is an Atoll, Kaneohe consists of fringing, patch and fore reefs off a high volcanic island). Kaneohe Bay has also historically been heavily impact by local human activities, and in the 1970’s there were alarming issues of nutrient pollution from sewage and land runoff into the bay. Additionally, there are differences in reef communities that are typical to reefs of the main Hawaiian islands, such as overall lower coral diversity. On top of these inherent underlying differences, my experience of Kaneohe Bay reefs was marked by a mass bleaching event. My timing was just so that I arrived at the start of a massive bleaching even that wreaked havoc on corals throughout the Hawaiian Islands. Kaneohe Bay experienced temperatures as warm at 31°C for several days in a row. This thermal stress caused many of the corals to expel their symbiotic partners (zooxanthellae) resulting in a process called coral bleaching. Bleaching often results in mortality for many, but not all corals. I had the unique opportunity to assist surveys of bleaching and coral recovery across Kaneohe Bay during my visit. Jumping in the water at Kaneohe Bay, you are likely to see a few dominant species of coral, interesting invertebrates like sea cucumbers and urchins, and lots of macroalgae. And you’re more than likely to run into some sea turtles! 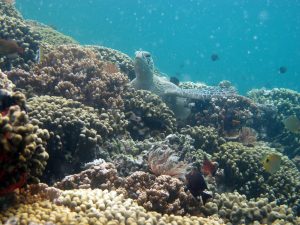 A patch reef in Kaneohe Bay with low coral diversity and its resident sea turtle. 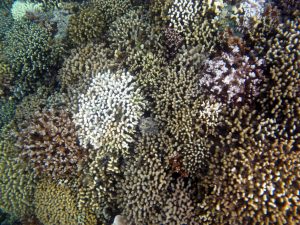 An example of coral bleaching (white).

The third stop in my travels was Moorea, French Polynesia. I did research for my MS degree at Cal State Northridge (http://www.csun.edu/~mbgsclub/) in Moorea, so this was much like returning to my ‘home’ reef. Moorea is similar to Hawaii in that it is also a high volcanic island. The reefs of Moorea, however, are characterized by a much higher diversity of coral species and overall less macroalgae. Jumping into the water on Moorea you’re likely to see many species of colorful corals, lots of colorful parrotfishes, and a variety of both fleshy and calcified macroalgae. My first trip to Moorea was in 2006, as part of the Three Seas Program with Northeastern University (http://www.northeastern.edu/cos/mes/experiential-education/three-seas/). Interestingly, I noticed that 9 years later there are some major differences in the coral reef community… but that is a story for another time. 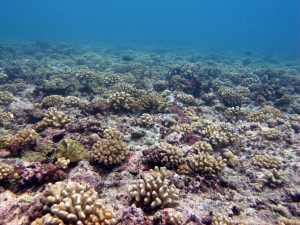 The fore reef on the north shore in Moorea, French Polynesia. 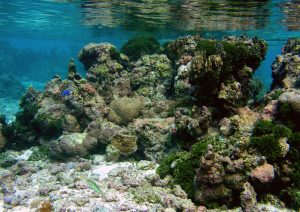 A coral outcropping on the back reef of the north shore in Moorea, French Polynesia.

While I sift through the data I collected during my epic journey, I think back to these three interesting and unique locations. Palmyra, Kaneohe and Moorea are all very different from each other. I wonder how we can ever really understand a coral reef when they vary so widely in composition and structure within even one geographic region of the ocean? This is a question that many coral reef scientists often think of when trying to make broad generalizations from relatively focused experiments at one or a few locations, and one that I am still trying to find the answer to. A reef is not a reef, and I am grateful I had the opportunity to spend time at each of these reefs in order to fully understand how different, yet similar, coral reefs can be.