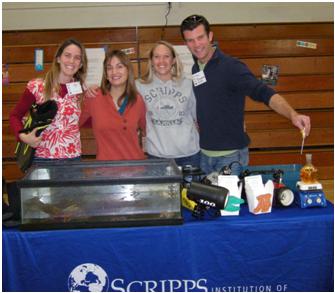 Emily Kelly shows students the shoes of a marine biologist.

I recently participated in an interactive career fair called “If the Shoe Fits” at Mission Bay High School with fellow Smith lab member Emily Kelly.  Emily and I represented SIO and the career of “marine biologist”… our shoes were SCUBA diving booties and fins.  We were accompanied by fellow SIO students Kate Furby of the Sandin lab, and Phil Bresnahan of the Martz lab.  This was my first career fair, and I had the pleasure of learning the ropes from a seasoned outreach veteran. Emily has an incredible passion and talent for talking with students about marine ecology and conveying her enthusiasm for the ocean. I had fun learning about communicating with students, and talking with them about why I love being a marine biologist.

Our career fair display was a hit, with a shallow touch tank that allowed us to show students local marine species and encourage their curiosity for these amazing animals.  We talked with students about how sea stars are voracious predators that eat prey by everting their stomachs and how the holes in the kelp blades were caused by hungry sea urchins that had munched away the algae.  The star of the show, without a doubt, was the lion’s mane nudibranch, Melibe lionina.  This translucent nudibranch has an oral hood lined with tentacles that resemble a lion’s mane as it swims through the water by undulating its body.  One of the popular questions we asked the students was to hypothesize what the nudibranch would smell like?  The students ranged in age from freshman to seniors, with varying levels of biology background, and their answers ranged from salty to fishy.  They were surprised to discover that the nudibranch actually smelled sweet, some said like watermelon candy, which is caused by an enzyme produced by the nudibranch that is thought to deter predation. 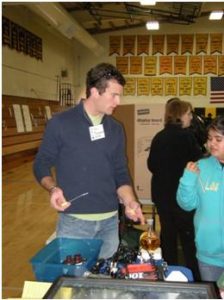 Phil shows a colorful demonstration of changing pH in a flask and talks about being a marine chemist.

In addition to the touch tank, we also showed a slideshow with underwater photographs that we each had taken during our research trips.  One of the fun aspects of our job is conducting research underwater by SCUBA diving.  Emily displayed some of her dive gear and described how we breathe underwater using a SCUBA tank and regulator.

Phil represented the marine chemists using a colorful chemistry demonstration with a flask of liquid that changed color depending on pH.  He used the pH indicator dye m-cresol purple, and by adding either hydrochloric acid or sodium hydroxide (a base), he showed a visually striking demonstration of changing pH and related this to the importance of pH in the ocean.  This topic is of particular concern with the heightened awareness of the effects of ocean acidification (decreasing ocean pH) on marine ecosystems. 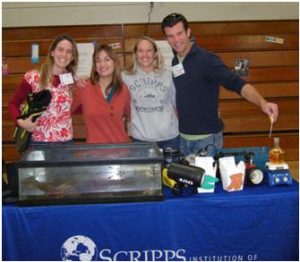 The group at the Mission Bay High School career fair, “If the Shoe Fits”.

It was an enlightening experience to speak with high school students about my career path.  I received a shocking reminder about the importance of outreach and sharing my enthusiasm for the ocean when we heard several Mission Bay students say they had never been in the ocean before.  One of the best parts of being a marine biologist is inspiring other people to appreciate the ocean in new ways… such as seeing a freshman in high school squeal with excitement after holding a nudibranch.  This is one more reason I love being a marine biologist!