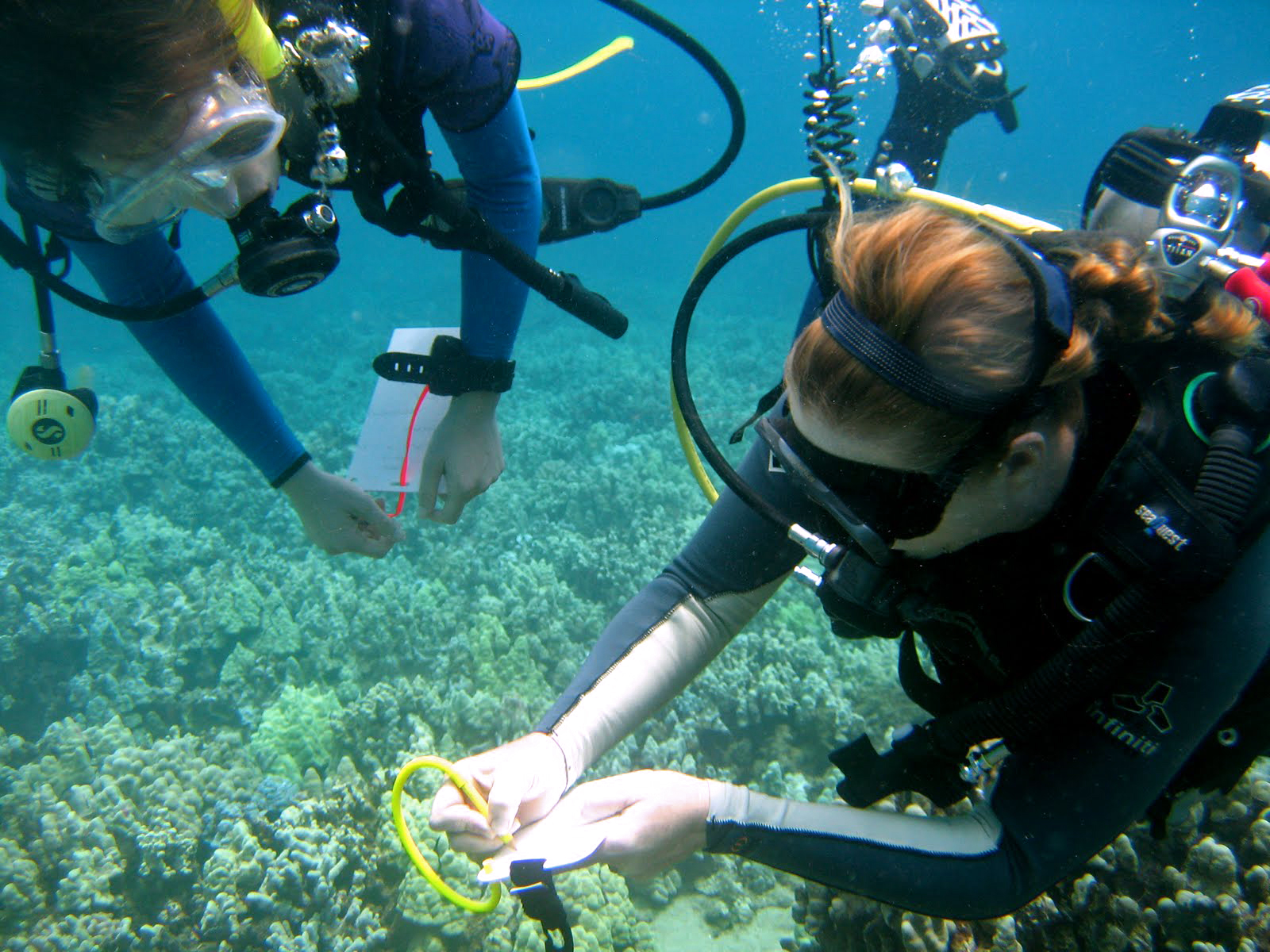 This is a blog post from Emily Kelly, a PhD student in our lab, following her current research in Hawaii.

I’ve just returned from three months of diving and running experiments in Maui (what a great job!) and as I sit in my San Diego office pouring over datasheets, I miss the daily tropical diving and stolen underwater moments with spinner dolphins, hawksbill turtles, and frogfish.  The silver lining of this sad tale of a graduate student daydreaming out her office window is that hours in the office reflect the large amount of data we collected from our Maui research projects.  It’s this data that will help us answer some of the questions we’re asking about the ecology of coral reefs on Maui and the interactions between corals, algae, fish, and urchins.

Most of our work is focused on one reef in West Maui- Kahekili Reef Park aka Airport Beach in Ka’anapali.  The Hawaii Division of Aquatic Resources has collected data over the past 15 years showing a decline in coral reef health around the island.  This typically means that coral has been dying or has been overgrown by algae, it’s constant competitor for real-estate on the reef.  Having witnessed and mapped this decline, in July 2009 the state of Hawaii made Kahekili a Herbivore Fisheries Management Area.  This means that fish and urchins that eat algae (the lawnmowers of the reef know as “herbivores”) cannot be fished at this site.  The goal of the management area is to increase the number of lawnmowers (herbivores) on the reef so that they’ll eat the overgrowing algae and therefore help the coral recover.  Coral reef scientists have talked a lot about how herbivores could help keep coral reefs healthy and how they might help coral reefs recover from decline.  But this is the first time that this type of protection has ever been implemented on a reef anywhere in the world.  Wow!  That makes Kahekili a really exciting place to work and play and it’s a great opportunity to study how herbivores are interacting with the reef.

One of the goals of our work on Maui right now is to create the “grazing budget” for the reef.  This means we want to know how fast fish and urchins are eating different types of algae and we also want to know how fast those same types of algae are growing.  If algae is growing faster than it’s being eaten, we know it might increase its coverage on the reef (read: bad for coral).  If fish are keeping up with the algae or even eating it faster than it’s growing, algae might decline and make space for coral (you’ve got it- good for coral!).  Since it can take a long time for coral recovery to occur, a grazing budget will give us clues about what to expect on the reef in the future.

We’ve just finished our second summer working at Kahekili and two other nearby sites.  With funding from the Hawaii Coral Reef Initiative, we’ll be able to continue this work at sites all around Maui to compare what’s happening on different reefs.  We’ll be back in Maui in February 2011- see you in the water!  or check the Smith Lab website for updates from the reef.